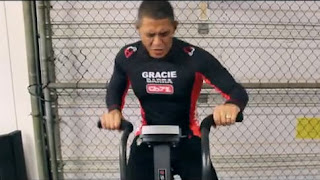 One of my goals in the off-season is to increase strength and conditioning. After spending much of 2019 adding muscle via hypertrophy programs like Christian Thibaudeau's 20 Weeks to Hollywood Muscle and his Best Damn High Volume Workout for Naturals, I'm close to the body comp I want. Now the goal is to train this new muscle, and trim another inch off the waistline to get in the neighborhood of 140.

Reviewing some of my favorite conditioning resources, I've been spending some time researching Joel Jamieson's Tempo Intervals. He uses them primarily as a recovery tool. They consist of 5-10 rounds of 10-12 seconds of work (at an RPE of about 7) followed by 60 seconds of active rest.

The Ultimate Recovery-Boosting Interval - 8 Weeks Out

There are a lot of different things you can do for the work sessions: running, rowing, Prowler pushing, stationary cycling, jumping rope, etc. What's interesting is that he says that for combat athletes, bag or pad work is great for the work sessions, but feels that "it’s not very easy to do this type of interval using grappling drills unfortunately."

I disagree - and wonder if Joel is just not as familiar with the ground game as he is with standup striking (his background is as a strength coach, despite is more recent work as a S&C guy for former UFC flyweight champion Demetrious "Mighty Mouse" Johnson). Especially given that you only do the work for 10-12 seconds.

Right now I'm trying to figure out where best to place these workouts. Joel suggests 1-2 a week. If I end up doing strength training on Monday and Friday, and jiu-jitsu training on Tuesday and Thursday, (and the occasional Saturday), then Sunday looks like a good place to put at least one of them. Maybe Thursday morning the other. That would give me a full day off on Wednesday and the opportunity to rev my system back up before returning to the mats Thursday night.
Posted by burien top team at 11:21 PM